If you are just discovering Azban, you have come to the right place.

This page explains what Azban is, how it works and basic usage. 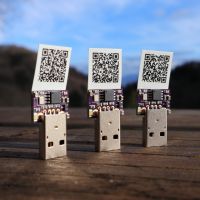 Azban is a USB payload delivery platform. It allows running scripts on desktop computers simply by plugging a device in the USB port.

When plugged in, the Azban device presents itself to the host computer as a common USB keyboard.

It simulates keystrokes to open up a command-line terminal, download the payload (configured in the management dashboard), and run it.

The dashboard (as seen from a mobile device), after registering a new device

Every Azban device is shipped with a QR code attached. The code represents a link to register the device.

Scanning this code will open a page from the management dashboard where (after logging in) the device can be registered with a custom name.

From this point, the device is identified as belonging to the user who registered it - only they can manage it.

Upon registering a new device, a default payload is configured which collects some basic assets from the host it's plugged into: the hostname, system version and name of the user currently logged in.

The payload is written as classic Bourne shell script.

Other than automating actions on a computer, one of the main purposes of Azban is to collect data, referred to as assets.

Calling a specific URL allows the payload to push assets back to the dashboard.

These assets are then available directly from the device's page in the dashboard.

More details about this can be found here: Collecting assets.

Due to the nature of the Azban USB device, it is subject to limitations from the host computer it's plugged into.

Because Azban simulates keystrokes, it is dependent on the keyboard layout configured in the operating system of the host computer it's plugged into.

Plugging the device into a host configured with a somewhat "exotic" keyboard layout will produce unpredictable results.

However, Azban is smart enough to work around many "common" keyboard layouts.

So far, Azban is tested and known to work with the following layouts:

Azban also depends on its ability to successfully open a command-line terminal and run Curl.

While this works very well on Windows (since Windows 10), MacOS, and many Linux/UNIX-based desktop environments, it remains a "best effort" solution, with no guarantee whatsoever that it will work on a specific system.

Azban needs to fetch its payload from the cloud. Therefore, it requires the host computer to be connected to the internet.

Plugging the device into a computer with no internet access will fail to download the payload and therefore not be able to execute its actions.